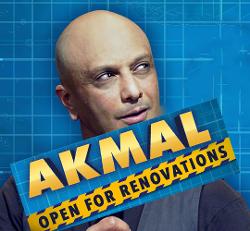 Known for his incredible ability to deal with hot topics in a hilarious and slightly offensive way, Akmal promises this year to deliver a show that is punctual and jam-packed with words...some of which he will be using for the first time.

One of Australia's most respected and accomplished comics, Akmal draws on his Arabic heritage, his experiences immigrating to Australia at the age of 11, and his disillusionment with religion and the modern world to deliver a stand-up show that is fresh, honest and ridiculously funny. Whatever you do don't mention the words - Bush rats.

Saleh entered the world of comedy in 1990 under the alias Peter Saleh ("so people would think I was white", he says).  Since then he's performed in movies, on TV and as a regular radio and talk show host, and has written a book about his journey from Egypt and his life as an Arab on the Australian comedy circuit.

As a stand-up he's performed at Festivals all around the world including Edinburgh, Montreal & The Melbourne International Comedy Festival and has won numerous awards, including two ARIA nominations for his live specials...

"No one wanted the show to stop...he seemed to own the stage" Sydney Morning Herald