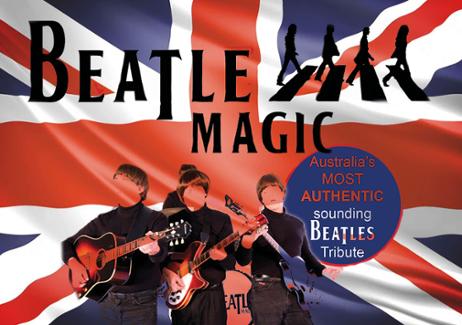 For over 14 years now Beatle Magic have been declared as Australia's MOST AUTHENTIC SOUNDING Beatle Tribute Show ever to hit our shores.

This was the quote from Australia's Radio legend Mr. Bob Rogers himself. If anyone would know.... Bob would, He was assigned by 2SM back in 1964 to travel with the Beatles on tour of Europe, Asia, Australia and New Zealand.

Ever since Beatle Magic has posted their video's on You Tube, people from all over the world have commented on the sound that Beatle Magic has produced, such as " Amazing likeness in vocals " " Are you sure that this is not a recording of the real Beatles, the vocals are Amazing." And so on.......

Beatle Magic sound that close to the original, that You Tube themselves had started to pull down the clips temporarily due to copyright, thinking they were playing to the original sound track.

Luckily this has been rectified and the clips have been reinstated.

In 2017 Beatle Magic were nominated for the prestige Australian Variety Artists "MO AWARDS" in the best Tribute artist/show category and then for an "ACE" award in 2019.

Founding member and band leader Bill Croft (as John Lennon) is no stranger when it comes to the sounds of the Beatles, being his favourite group of all time, he has been performing their hits from an early age. As being a Beatle Member was not an option, his passion is to keep their music ALIVE.

All Beatle fans young and old if you missed out on seeing The Beatles live well look no further as you will not hear anything closer to the real thing in the BEATLE MAGIC SHOW experience...

The response to this show has been over whelming. This show really is the most authentic sounding Beatle show in Australia.

From LOVE ME DO to LET IT BE, Beatle Magic will HELP you GET BACK to YESTERDAY.