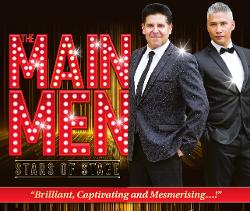 The Main Men, Stars of Stage starring Joey Fimmano and Dexter Villa, is an exciting musical tribute to the Crooners and Hitmakers -  presented by 22 times ACE Award and MO Award winner Joey Fimmano.

Joey is a virtuoso pianist, singer, accordionist and gifted performer with a charisma, versatility and natural energy that captivates audiences wherever he performs around the world. His first steps on stage were with the accordion at the tender age of 5 years, where his love of the classics and the exquisite melodies of the songs of yesteryear and today grew.

Joining Joey on stage is Musical Theatre star Dexter Villa, his exhilarating vocals and warm stage presence have won him roles in many musicals including his leading role in the original Australian Cast of the hit musical "Miss Saigon" at Sydney's Capitol Theatre. He went on to perform alongside Aussie icon Rhonda Burchmore at the Crown Casino in Melbourne en-route to a two-year residency at London's prestigious Theatre Royal Drury Lane for the then still-running original production of "Miss Saigon".

The magnificent repertoire will surprise and amaze by transporting the audience on a spellbinding nostalgic journey of the classics that we all know and love. These 2 exciting performers will leave you mesmerized with their tribute to the melodies of the Kings of cool including Frank Sinatra, Neil Sedaka, Bobby Darin, and 70s icons Barry Manilow and Elton John, to the swinging Big Band sounds of Michael Buble, the enchanting melodies of Andrew Lloyd Webber, the moving inspirational renditions of Australia's own Peter Allen and the electrifying piano instrumentals that Joey performs in the flamboyant style of none other Liberace.

The Main Men -  Stars of Stage will leave you feeling uplifted, spirited, happy and exhilarated with all its wonderful music and melodies loved by all who hear them, leaving the audience standing and cheering for more!

Two incredible artists it their own right, together with the greatest band in the land, all on the one stage.