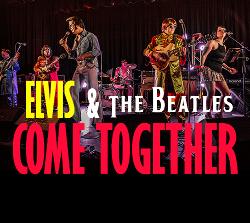 ELVIS & The Beatles - Come Together

For the first time ever, Two of the countries leading

tribute artists come together for the first time with the

ultimate tribute to the two biggest acts ever in the

Damian Mullin is one of Australia's top award

Croft's Beatle magic as the countries most authentic

Any Elvis or Beatles fan would tell you that without

Elvis there would have been no Beatles.

Over both of there careers , Both Elvis and The Beatles

covered each others songs. The early years the Beatles

covered a lot from Elvis's Sun record days and in return

Elvis covered his favourite Beatles tunes during the late

With ELVIS FOREVER & BEATLE MAGIC you are going

would have been like if the Beatles and Elvis had have

shared the stage together,

Beatles singing along side Elvis, singing each others

songs. This promises to be a very unique show.

Come along as IT'S NOW OR NEVER to COME