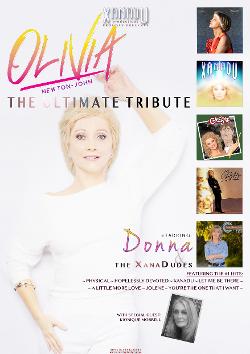 Join multi-award winning, international touring artist Donna Watson-Boyd for an electrifying night of music and fun, as she and her band The XanaDudes create a musical tribute to Olivia Newton-John's record-breaking career.

In a career spanning decades, much loved Aussie icon Olivia Newton-John has sold an estimated 100 million records, making her one of the world's best-selling music artists of all time.

DONNA is an award-winning International Artist who has paid musical tribute to Olivia Newton John on stages in Australia and America - on cruise ships and on land, in performances where audiences said the vocal similarities were astonishing.