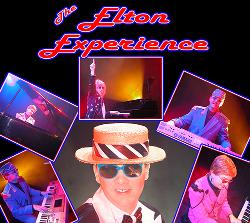 A Salute to Sir Elton John - THE ultimate tribute to one of the greatest living musical legends of all time, Sir ELTON JOHN.

Show-stopping music over four decades expertly brought together in one extravaganza. A show packed from start to finish with hit songs sung and performed by the versatile and multi award winning Danny Elliot.

Sir Elton John has sold more than 300 million records, making him one of the bestselling music artistes in the world, receiving 5 Grammy Awards, 5 Brit Awards - two for Outstanding Contribution to Music and the first Brits Icon to be awarded for his "Lasting Impact on British Culture. He has won an Academy Award, A Golden Globe Award, A Tony Award, A Disney Legends Award and the Kennedy Centre honours. In 2013 Billboard ranked him the most successful male solo artiste on the Billboard Hot 100 All Time Artistes Chart and he was inducted into the Rock and Roll Hall of Fame. He is an inductee into the Songwriters Hall of Fam, and was made a Knight Bachelor by Elizabeth II for services to music and charitable services.