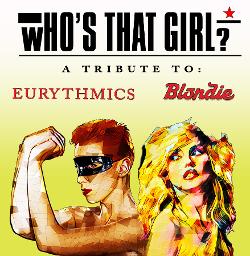 Who's That Girl? A tribute to Eurythmics & Blondie brings their exciting show to Club Burwood Rsl. Following sell out Sydney shows in 2019 at Wenty Leagues & The Vanguard promises an amazing night of music to remember. Eurythmics & Blondie, both stellar bands from 70's & 80's with their unique style & sound achieved global success with many international hits. Blondie paved the way with their fusion of pop/punk/reggae and early rap creating timeless hits like Heart of Glass, Atomic, Call me. Eurythmics pioneered a techno sound fused with rock/pop including hits such as Sweet dreams, Love is a stranger their later music brought the soulful sounds of 'Thorn in my side' Missionary Man' and There must be an angel. Eurythmics records achieved sales of over 75 million worldwide. Collectively Blondie & Eurythmics have been awarded the best accolades in music including the Grammys, Ivor Novello, Hall of fame and MTV. Together Blondie & Eurythmics are a dynamic duo which will deliver a night to remember